Sports writing, (EFE) .- A magnificent defense of the Dominican Republic against Germany allowed the team to achieve his second victory (68-70) and the classification to the next phase of the 2019 World Cup in China, with which he leaves the German team on the edge from the abyss, since it will be eliminated if France wins over Jordan.

The Dominican team took an intense encounter, of shrunken dolls and strenuous defenses, in which he knew how to play better in the hot moments and that allows them to be again among the sixteen best on the planet basketball, with great moments of the escort Víctor Liz (17 points, 5 rebounds and 4 assists), the center Eloy Vargas (16 and 5) the base Gelvis Solano (8 points, 5 captures and 11 assists) and the power forward Eulis Báez (9 and 4).

The pupils of the Argentine Néstor ‘Che’ García imposed themselves on a Germany that at the key moments depended heavily on the bodyguard Dennis Schröder (20 points, 3 rebounds, 7 assists) and was greatly reduced by his horrible afternoon from the triple line ( 3 hits of 19) attempts. Precisely, a triple failed by the pivot Danilo Barthel in the last play, sealed the Teutonic virtual elimination.

Dominican Republic, which came to win against Jordan (80-76) began dominating at the hands of Vargas and Liz (2-10, min. 4), although Germany began to close its defense and regain ground with the interior Daniel Theis and with the Schröder’s appearance, hitherto unnoticed, but which chained four points to change the initiative of the game (21-16).

The German machine seemed then oiled, and in the second quarter it continued defending, stealing and entering the race, until reaching the ten of advantage with a tray of the escort Maodo Lo (27-17, min. 12), which led to the Argentine Nestor ‘Che’ García to stop the match to stop the Dominican sangria.

An increase in the defensive level and the appearance, again, of Víctor Liz, put the game back into a fist and even went ahead with four straight points from Eulis Báez (31-32, min. 16), but a new irruption of Schröder, with a 2 + 1 and a triple, kept the German initiative to rest (39-37).

The defenses continued to be imposed on the attacks in a duel in which both played a lot -Germany was left out if he lost, Dominican would be forced to play it against France in case of falling-, when the lamp of the triples was lit to Dominican , with two followed by Víctor Liz and Dagoberto Peña (45-47, min. 26), exceptions in a shrinking dolls encounter, since both teams were below 15% in triples until then.

Schröder returned to throw of Germany, next to the free throws of Robin Benzing (52-47), but a robbery of Gelvis Solano that finished in unsportsmanlike of Johannes Voigtmann allowed to make a 2 + 1, followed by a triple of Luis Montero that put 52-55 in the electronic to close the third quarter and feed the Dominican hope. Before a paralyzed Germany, those of ‘Che’ García continued to grow and increase their income with a triple and a penetration of Eulis Báez (52-60). 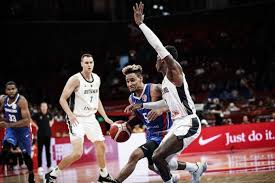 Germany reacted with a 10-0 to slumps and ravines when the offensive paralysis changed sides (62-60, min. 35), but Eloy Vargas and Gelvis Solano replayed the ‘Yes you can’ in the stands of Shenzhen ( 63-69) to 2-51 for last. In a situation of absolute emergency, Germany grabbed the free throws taking advantage of the fact that Dominican had already committed five fouls and saw the distance reduced to two points (68-70) in the absence of the last minute.
The Dominican Liz played a triple that was spit by the hoop, but a good Caribbean defense gave him another chance, a new triple marred this time by Báez.

The Dominican team celebrates the truinfo about Germany 70-68 and its classification to the second round in the World Cup in China. Source: El Nacionalhttps://elnacional.com.do/dominicana-vence-a-alemania-70-68-clasifica-a-siguiente-fase-mundial-de-china/?platform=hootsuite